Jim Corbett National Park is famous for natural bounty and wildlife splendour. The Park is spread over more than 520 sq. km. The diverse offering of floral count of Corbett Park is astonishing. There are about 110 types of trees, 51 types of shrubs, 27 types of climbers and 33 types of bamboo and grass are found. The most visible trees seen in Corbett are Sal Shorea Robusta, which is found over 75% of the main area.

The Jim Corbett National Park is blessed with the natural bounty in the form of distinct flora which comprises of fresh water flora and alpine flora. Extent over an area of more than 521 square kilometers the Corbett has diverse floral count that is absolutely astonishing. The various habitat types of Corbett is occupied by Sal forests, Khair-Sisso forests, Mountains, Chaur, and rivers and streams that owes their distinct assemblage of plants. According to botanical survey of India Corbett has 600 species of plants - trees, shrubs, ferns, grass, climbers, herbs and bamboos. These many distinct varieties of plant kingdom makes the national park sought after wildlife destination for those who wish to relax from hectic schedule of working throughout the year.

The most visible trees found in Corbett are sal, khair and sissoo. Many other species that contribute to the diversity, are found scattered throughout the park.
Chir pine (Pinus roxburghi) is the only conifer of the Park and is found on ridge-tops like Chir Choti but comes quite low in Gajar Sot. The upper reaches near Kanda have Banj Oak (Quercus leucotrichophora) growing which is essentially a Himalayan species.

Green is the fundamental color of nature and variety of flowering trees in Corbett lend that beautiful color to the forests. The forests of the Corbett is dominated by numerous flowering plant, some of them can be named as Kachnar (Bauhinia Variegata) with white tom pink flowers, Semal (Bombax ceiba) with giant red blooms, Dhak or popularly called as the flame of the forest with bright and eye pleasing orange flowers, Madaar or Indian Coral (Erythrinia indica) with red flowers and Amaltas (Cassia fistula) with bright yellow chandelier like blooms.

Herbs include many species of wildflowers belonging mostly to Pea and Aster families. They are most visible on grasslands or chaurs and on open areas. Drymaria diandra is a spreading annual herb with heart shaped leaves and occurs in moist shady places. Bhilmora (Rumex hastatus) is a sour tasting herb used for making chutney. Other species encountered in Corbett are Euphorbia hirta, a hairy herb, Indigofera liniofolia with bright red flowers, Clover (Oxalis sp.) with three leaflets, Solanum sp. and Leonotis nepatafolia (orange flowers and spiky round fruits).

In some parts of Corbett the vegetation is dominated by bamboo forest. The main species is Male Bamboo (Dendrocalamus strictus) having clustered stout stems and shining papery stem sheaths. Bamboos follow a peculiar flowering process. All bamboos in a forest flower together at the same time once in several decades. After flowering, fruiting and dispersal of seeds, all individuals die together.

Corbett National Park was the first Tiger Reserve under the project in India. So from that point of view Corbett is one of the oldest as well as the largest national park of India. The park is an ideal home for many majestic animals like the Royal Bengal Tiger, Asiatic Elephant and many other wild animals. Due to healthy population of wild today, Corbett is one of best preserved parks with 164 numbers of tigers and over 600 elephants. As per the recent survey Corbett reveals the highest density of population of tigers in the country at 20/100 square kilometers.
Apart from Royal Bengal Tiger Corbett is also a home to a sizeable population of the endangered Asiatic elephant and other critically endangered species including the Ghariyal. Some of the other known mammal species reside in Corbett include Asiatic Black Bear, Hog Deer, Walking Deer, Sambar, Sloth Beer, Yellow-throated marten, Otters and many more to list. Corbett also hosts a diversity of aqua fauna and birdlife with approximately 600 species including the great pied hornbill, white-Backed Vulture, Hodgson's bushchat, orange breasted green pigeon, Pallas fish eagle, golden oriole, tawny fish owl, Indian Pitta, Scarlet Minivet and reptile like the critically endangered Ghariyal, mugger Crocodiles, the king Cobra and many more to list.

The tiger (Panthera tigris) is perhaps the most celebrated of the wild animals of India. It is symbolises the power of Nature and finds an important place in our culture, mythology and legends. It has been worshiped as the guardian and ruler of the forest.

The elephant, largest of the land mammals, has been an integral part of the history, mythology, tradition, culture and religion of India. There are three surviving species of elephants in the world, one in Asia and two in Africa. The Asian elephant (Elephas maximus) is distributed in the Indian subcontinent and Southeast Asia. Unlike the African species, Asian elephants have been domesticated for thousands of years and have been used in medieval warfare, for temples, and as a working animal.

(Axis porcinus) is the rarest of Corbett's deer. It is closely related to the chital but is smaller in size. Unlike most other deer, the hog deer is not given to leaping over obstacles but instead, it escapes its predators by crouching low, ducking under obstacles. Its limbs are short and its hind legs are longer than the fore legs. This anatomy raises its rump to a higher level than the shoulders. 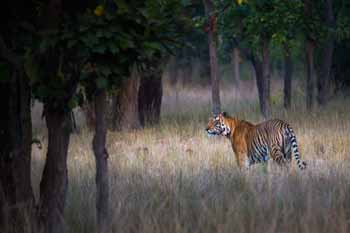 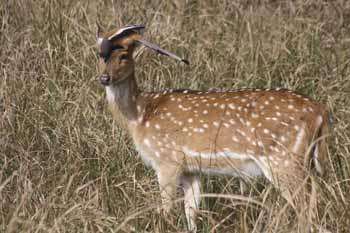 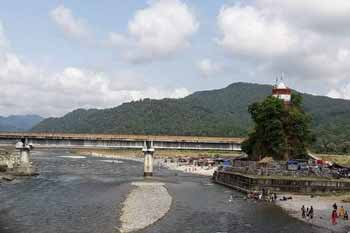 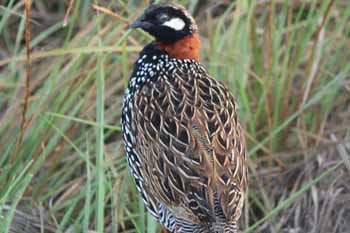 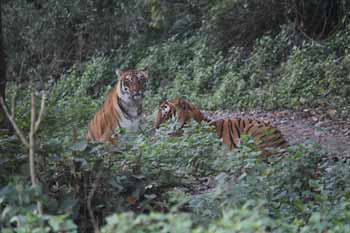 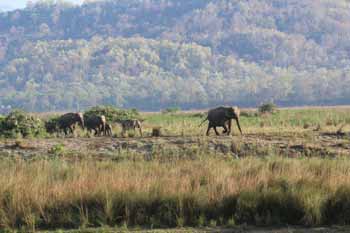